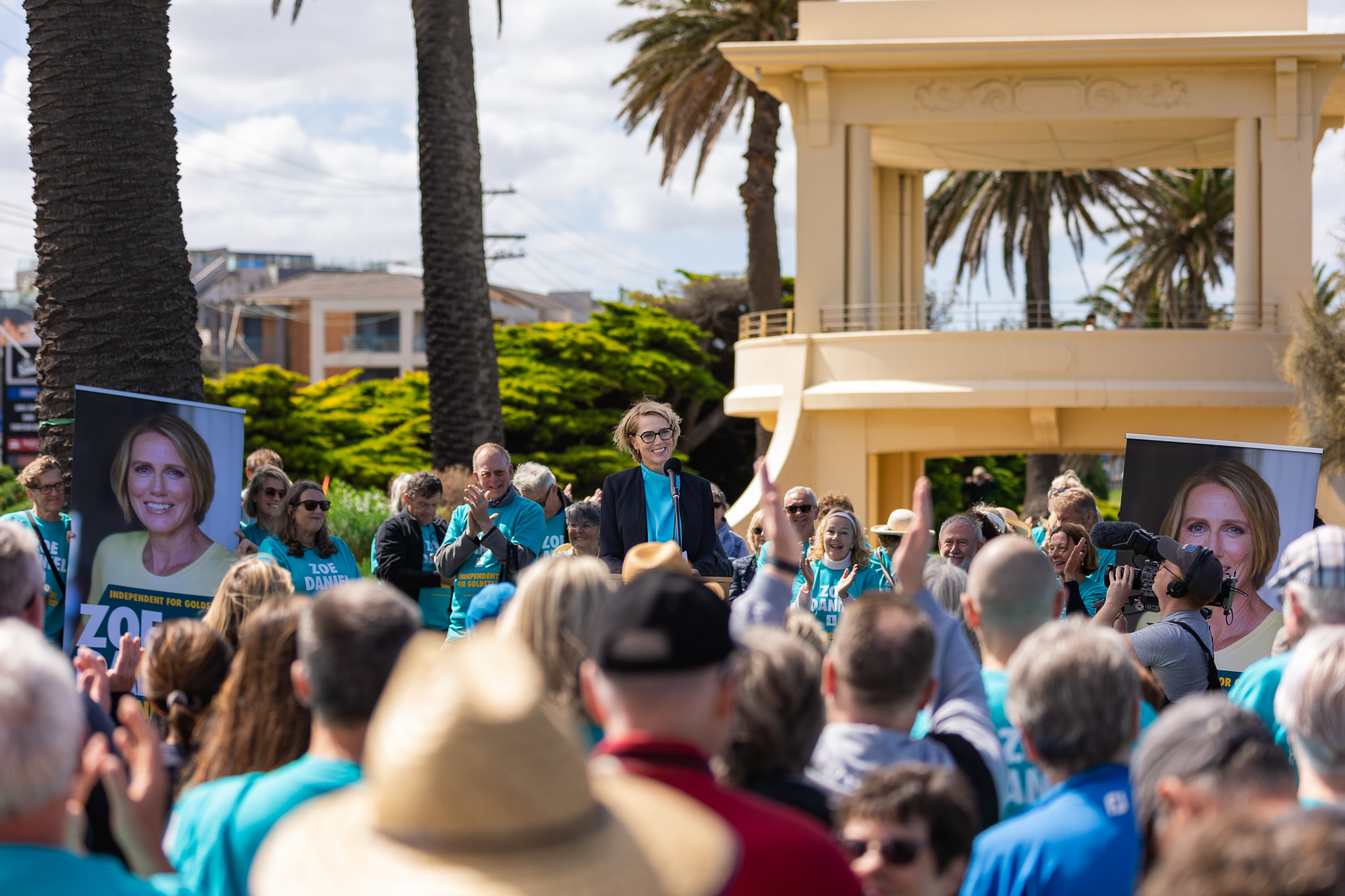 This is the transcript of Zoe Daniel’s Campaign Launch Speech on 27th November 2021 at the Sandringham Rotunda, Sandringham.

Hello everyone and thanks for being here.

I am so honoured to be your community backed independent candidate for Goldstein. And I thank the Voices of Goldstein for your trust. Trust is something that I don’t take lightly.

As a journalist of almost 30 years, I have built my career and my reputation on honesty and integrity. These things, I think, are paramount qualities in leaders who are, or should be accountable to us. But these things are missing.

We have waited too long for our current leaders to find these qualities, so we must make our voices heard.

Seeing you all here today, I am so very optimistic about what we can do together.

We, the people of Goldstein, with our brains, our hearts, and our courage, can bring about smart, forward focused climate policy, transparent economic management, create accountability and take steps towards genuine equality for women.

We can do a thousand other things by raising our voices.

For too long our vote has been taken for granted. This dynamic electorate must be seen – as we are today – and heard.

I have lived all around Australia and in many parts of the world, but in 2013 my husband and I along with our two children decided this is where we wanted to be. This is our home. We have been welcomed with open arms and now it’s my time to give something back to Goldstein.

I had no intention of entering enter politics before I was approached by Voices. I’d been a reporter for nearly three decades – an observer not a participant. I’ve spent a lot of time in the room where it happens, watching.

It’s time to step up to the table.

We should have a say.

On four continents I have covered climate related disasters, superstorms, floods, fires. In the United States I witnessed the unravelling of one of the world’s greatest democracies due to the erosion of truth, the mobilisation of misinformation and the loss of trust.

These two things are the great challenges of our time, and we cannot look away. Nor can we wait for someone else to respond.

If not now, when?

Something is happening here in Goldstein and in other electorates around this wonderful, truly lucky country, something momentous.

I am a swinging voter.

I voted Liberal as recently as 2016, expecting that Malcolm Turnbull would advance a pro-climate, forward looking economy agenda.

And what did we get?

Yet more partisan infighting, yet another leadership spill, the fifth Prime Minister in less than a decade, another six years of inaction on climate, culminating in our latest Prime Minister’s recent appearance on the world stage in Glasgow.

That speaks for itself. I have no words.

The fact is that this government can do no more than the Nationals will allow – and the reality is they want no action at all.

Meanwhile the so-called modern Liberals whisper from the sidelines, but when it comes to the crunch they vote just like Barnaby Joyce.

When pressed, they obfuscate. And it’s what we commit to doing in the next term of parliament that counts.

I’m with the Business Council when they say we need a 50 percent cut in carbon emissions by 2030.

And why do they say that?

Because that’s what business needs to provide the certainty investors require to put their money into clean, green technology that could make Australia a clean energy superpower.

That economic growth underpins our prosperity, our lifestyle in Goldstein.

It’s not a risk, it’s an opportunity.

But the window will close, the money will go elsewhere, and we will be the poorer for it.

It’s the same story on the restoration of integrity to Australian politics.

If it was good enough for Bridget Archer – the Liberal holding the most marginal seat in the parliament, which happens to be the seat of Bass where I grew up – to have the courage to cross the floor on an integrity commission, where were the modern Liberals?

Where were the modern Liberals when they had a chance to support Helen Haines’ legislation for a National Integrity Commission?

They were far from standing up for integrity, honesty, and truth, they were actively blocking it.

What are they so frightened of?

The modern Liberals say it’s bizarre that independents would want to challenge moderate voices in their party.

Well, we wouldn’t be needed if they used those voices, would we?

They’ve had their chance and we can no longer wait.

It’s time to make way for the Goldstein community to elect someone who will find their voice, and their backbone for that matter, when it matters.

Imagine what a crossbench of community minded independents could achieve from the sensible centre.

It is so exciting to consider what we can do.

Goldstein is named in memory of Vida Goldstein – a global equality icon who stood up for Australian women in an extraordinary way a century ago. In fact, some of her close relatives live in the electorate.

As we continue the battle for genuine gender equality and safety for women in 2021… Brittany, Grace, I see you… Vida Goldstein is a brave inspiration for me, for us and for our daughters.

What an honour it would be to be the first woman to represent you, the people of Goldstein.

No doubt it will be a tough campaign…

We stand here just a few hundred metres from the Trevor Barker Oval, where my kids spend a lot of time kicking the footy.

Back in the day, my dad played in the VFL. It was a rough game in those days, muddy and sometimes bloody.

More than once, he had the challenge of marking the greats Peter McKenna and Peter Hudson not to mention Alex Jeselenko and Royce Hart.

He knows what it is to be in a tough contest – and he taught me to be the same.

I’m finding my voice. Find yours.

Thank you for being here. I aim to earn your trust.

Legalese
Zoe Daniel acknowledges the original custodians of the land on which we meet and work, including the land of the Boon Wurrung people of the Kulin Nation and other lands and nations within this country. We acknowledge their elders past, present and emerging. Sovereignty was never ceded.

Did you receive something from the Liberal Party in your INBOX?

LYING IN POLITICS MIGHT BE LEGAL, BUT IT IS STILL LYING.

This desperate material sent to voters in Goldstein is a legal lie.

Zoe Daniel does not have the intention, power or the jurisdiction to change anyones taxes.

Don't let them waste another three years for a FEDERAL INTEGRITY COMMISSION!